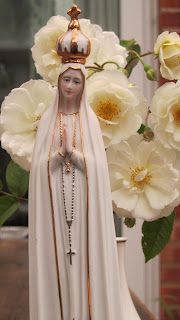 Our Lady of the Rosary at St Anne's Brockenhurst - what could former Anglicans add to that from our Patrimony? A church dedicated to the Mother of the Lord, and a Mass of Our Lady. Well, at the end of this morning's Mass I began singing the Angelus; and found I was operating solo. It was a great surprise to me that the tone I supposed everyone knew was unfamiliar to a Catholic congregation. They were very kind, though, and even said they would like to learn it! This just confirmed a conversation I'd had a few days ago. 'We thought', said this cradle Catholic, 'that the Church of England disliked such Roman things as "praying to the Virgin Mary" - yet we find you are far more Marian that we are!' The truth is, Anglo-Catholics have had to fight for a proper place to be given to the Mother of Our Lord - and in doing so we have probably become 'more Catholic than the Pope'. Now that we are in Communion with the Holy Father, we no longer have to fight in that way.

But it is still surprising to find that part of the patrimony we are bringing with us is devotion to Our Lady. At our Ordinariate Mass on Sundays in Southbourne we end by singing the Angelus - and again, those who join us from the Parish congregation seem delighted that we are using something which once was so familiar to them, but has largely been neglected in recent years.

I believe Our Lady has a great concern for the Ordinariate. The first of them here in England is dedicated to her under the title of Our Lady of Walsingham. For me, the process began years back, when we started the Ecumenical Friends of Fatima (EFFA), and I was asked to lead Pilgrimages there. At the end of the Procession on May 13th the Bishop of Leiria/Fatima generally calls four or five bishops forward. The crown is removed from the Image of Our Lady, and these bishops are invited to touch the Spina, the bullet set in the top of the crown. On our first visit it was intensely moving that Bishop Seraphim included me, an Anglican bishop, in that little group. The bullet was the one which had so nearly killed the Holy Father; that attack had happened on May 13th, the anniversary of the first apparition of Our Lady in Fatima. In thanksgiving, the Pope gave the bullet to the shrine. It might seem a curious gift, but Mary's protection was something John Paul II valued hugely.

In all her conversations with the Little Shepherds, Our Lady emphasised the importance of praying the Rosary. Our Anglican Group, EFFA, has taken this call to prayer very seriously, and each day our seventy or so members pray one of the Mysteries in turn, asking Our Lady's prayers for others in the Association. Those prayers are still being answered. So far, thirty of us have come into Communion with the see of Rome. Perhaps part of our Patrrimony involves reminding our fellow Catholics that Mary is mother of us all, and calls us all to prayer with her.
Posted by Edwin at 10:44 2 comments: