The farewell to Bishop Eric managed to be both large-scale and intimate. Despite the snow, which prevented many from being present, the Cathedral was comfortably full , and the singing stirring. The music began with the organist playing selections from the Gilbert & Sullivan Operas, and ended with Wagner. That caught something of the man; a quiet English sense of humour, and a European seriousness. Representatives from other churches - Chartres Cathedral, where he was a Canon, Orthodox and Free-Churches, and Cardinal Cormac Murphy O'Connor - witnessed to his wideranging friendships and his concern for Christian Unity.

His successor as Diocesan, John Hind, presided at the concelebrated Funeral Mass, along with the other Bishops, Archdeacons and Area Deans of the diocese. His children spoke affectionately of his reading to them at bed-time, and themselves read to us from the end of the Lord of the Rings. Occasional interjections and squeaks from assorted grandchildren lightened the whole proceedings. Richard Eyre, who had served as Archdeacon during Bishop Eric's episcopate, gave an address which ranged from his Lincolnshire childhood through the influence on him of Pusey House and Oxford, his service as Chaplain of Exeter College then as Dean of Worcester and eventually to his consecration as Bishop of Chichester.
For myself, I shall miss him hugely. My memories of him go back to my undergraduate days when he was President of the Oxford University Church Union - a power in the land in that distant time. I learned all I ever needed to know about chairing meetings from his handling of the Committee of that body, and later of the Executive Committee of the English Church Union of which he was President. He was Chairman of the Council of St Stephen's House during my time there as Principal. My senior by twenty years, he was always a model of what a priest and a bishop might be; and he was unfailingly supportive and helpful whenever I turned to him. He will be greatly missed.
Requiescat. Jesu, mercy. Mary, pray.
Posted by Edwin at 22:26 No comments: 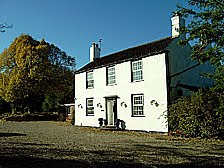 Crostwick is northeast of Norwich, on the road to Coltishall. This was its Vicarage (above) now a Hotel. Royal Air Force Coltishall (now also redundant) was an important part of my life as a young Fighter Controller. The Rector of the Horsham Benfice now lives in the next village, Spixworth. The other minister listed there is a Methodist lady. 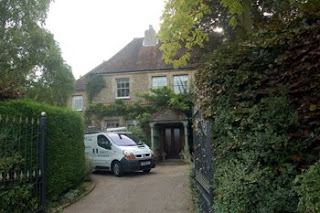 rs built. The Vicarages and Rectories of England were great treasures, part, you might say, of the Patrimony of the Church of England. They were often built by the Incumbent himself, or by the local Patron of the living. Now dioceses treat them as their private property. This is Mogerhanger, another parsonage 'surplus to requirements', and pictured as it was undergoing a make-over.

In this week's SPECTATOR there is a review by Lucinda Lambton of Anthony Jennings' 'History of the English Parsonage'. She writes of 'a teeth-grindingly scandalous state of affairs partly brought about by the grotesque mismanagement by the church and its diocesan boards, and partly by the egalitarian misapprehension that these beautiful and historical architectural treasures .. somehow cut the clergy off from their poor parishioners'. '"The great 20th-century sell-off" as it is described by Jennings, will be to the church's eternal detriment' says Lambton - and who could argue with that?

The Church of England is not alone in its vandalism, of course. Wales has been at it as well. A former student of St Stephen's House has brought lo life and most wonderfully restored the Old Vicarage at Norton, near Presteigne - not as a parsonage, but as a very superior B&B. 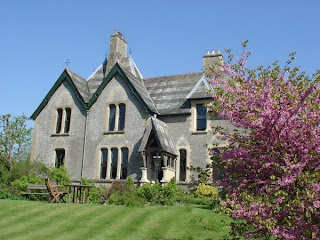 You can find it described on his website at
http://www.oldvicarage-nortonrads.co.uk/
Perhaps you are not too late to book a post Christmas break? And you might spend some of your Christmas book-token on Anthony Jenning's book (published by Continuum at £25): then from the comfort of a chair by a log fire in the former Vicarage (built by Gilbert Scott) you may douse your natural good nature with what Lucinda Lambton calls "Jennings' collection of diocesan anti-parsonage quotes".
Happy Christmas. 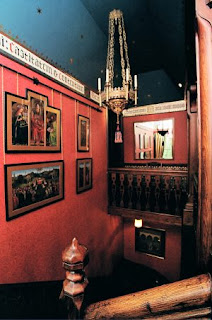 High Victorian Gothic at Norton, sympathetically and beautifully restored.
Posted by Edwin at 19:06 No comments: 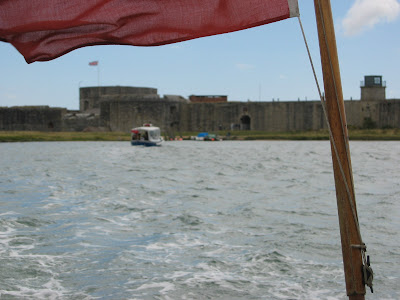 One of our favourite spots on the Solent, just five miles from home, is Hurst Castle. Approached by ferry on a Summer morning, it looks delightful. 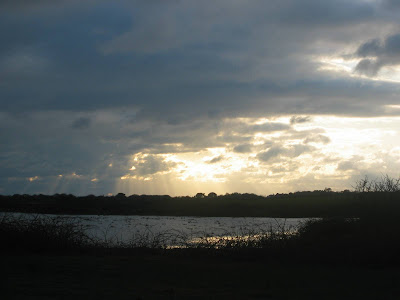 When the winter sun is low over the Salterns, the ancient saltpans from which Lymington made its fortune, the prospect is altogether more threatening. 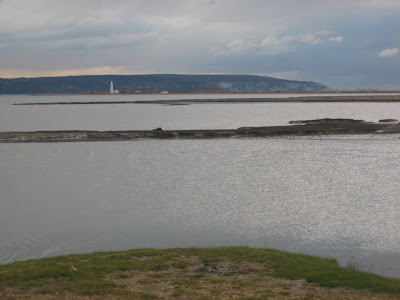 Charles I was moved here from Carisbrooke on the Isle of Wight around this time of year in 1648. He was allowed to walk on the shingle spit which connects Hurst to the mainland; but it must have been a bleak and dispiriting prison, not least because after his failed escape attempts from the Isle of Wight he knew his next prison would be the Tower. Even today, seen across the Western limb of the Solent, you can get some idea of its isolation. In the image above, the lighthouse stands out, a 19th Century replacement for earlier lights on Hurst Spit. Where the land falls away on the right are the Needles, Westernmost tip of the Isle of Wight. Less than a mile of water separates the Island from the mainland here. Behind the lighthouse is the grey bulk of the Castle, built by Henry VIII to defend the approaches to Southampton from French or Spanish attack. The stone he used to build it came chiefly from Beaulieu Abbey... so he was not only into re-forming the church, he turned ploughshares into swords and monasteries into fortresses. 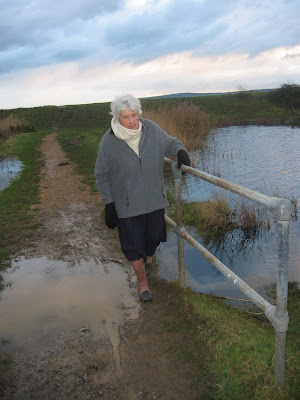 The land was especially wet today, and here is Jane, known affectionately as the Flying Buttress because she propped up a flying bishop, picking a cautious path along the causeway. 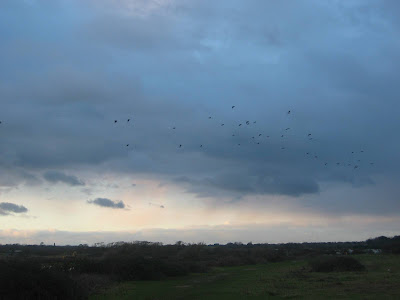 This afternoon, the light was changing every moment, and the calls of birds were all around; oystercatchers, curlews, gulls, ducks and wading birds of every sort. Then, as we headed home a great flock of Plovers flew over. They are on some endangered lists; here on the former saltmarshes they are flourishing - a hopeful sight for a dark and chilly time of year.