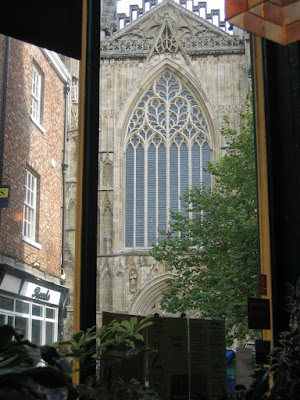 You can't escape the Minster. Down alleyways, over roofs, through cafe windows, it is always there. For nine years it was very familiar to me when I was Vicar of Hessle, especially as the place where successive curates were ordained. So during a three-day breather, I went there to Mass on the morning of SS Simon & Jude, in the lovely Zouche Chapel. Canon Glyn 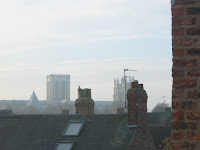 Webster, whom I'd known as a young priest in those distant days, celebrated. An even older friend, Fr Philip Cousins, was in the congregation. We had been contemporaries at Cuddesdon (where there was once a Theological College, until it was taken over by Ripon Hall) and he has retired to York.
After Mass, Philip and I spoke of the Pope's initiative in proposing Ordinariates for former Anglicans. The very idea seemed strange to Philip; and even stranger that I should be so enthusiastic about it. Yet once we would both have been regular in our prayer for Christian Unity, and looked forward to a time when the Church of England would no longer be a separated part of Catholic Christendom.
To me, the Holy Father's initiative is an answer to prayer. At first there may be relatively few of us. Once people come to understand that this is no strange beast but quite genuinely a manifestation of the Church in England, many more will be attracted to it. Little by little the shrinking of the Established Church will make it impossible for anyone to pretend that it alone is 'The Church Of England'. As dioceses are united and extinguished, and buildings closed, it will look more and more like the Church in Ireland. Once Killalough, Kilfenora, Clonfert and Kilmacduagh were all separate dioceses - then in 1976 even those four together could no longer pretend to be a diocese and they were united with Limerick, Ardfert, Aghadoe and Emly. When something like that has happened in England, we might eventually realise that we all need one another.
And still the Minster will be there, perhaps serving all Christians in York, not just those who chose to obey Henry VIII. Young's Hotel, where Jane and I spent part of our Honeymoon, is now called the Guy Fawkes. He had been born in that building. Today his remembrance has all but disappeared, overtaken by an Americanised "Hallowe'en".
The traditions and histories of separated Christian groups need somehow to come together, so that all of us can hallow the memories of the Saints, reclaim for our nation Catholic and Protestant martyrs alike, together admit that it is our own sinfulness which separates us. In 1843 Newman's final sermon at Littlemore was called "The Parting of Friends". As his canonisation approaches, we can perhaps thank his prayers for the Reuniting of Friends. There could be no greater miracle than this, to prove his sanctity.
Posted by Edwin at 09:48 No comments:

One of the details in the forthcoming Apostolic Constitution which most exercises me is the question of clerical celibacy. I understand that the intention of the Holy Father is to bring into the Catholic Church what is authentic in our Anglican Patrimony. Now the distinctiveness of the Church of England (and so of the Anglican Communion) was defined at the Reformation. At that time the matters of distinctiveness related to:-

[1] the Communion of the people - that it should be frequent, and in both kinds;

[2] Prayer - that common prayer should be in a language 'understanded of the people', and

[3] Clerical Marriage - that the clergy should be free to marry, if called by God to that Holy Estate.

We have given up on the part of the first thanks to the swine flu 'pandemic' (or more properly panic), Rome has conceded the second, but for me the third is the most important of all. The wives and families of priests and bishops have been one of the glories of our Communion; and by permitting clerical marriage we have increased the value of clerical celibacy when it has been freely chosen. It has also drawn us closer to Orthodoxy.

Of course it might make difficulties for the Roman church if there were another authentic part of the Church in England which does not share its rules on celibacy. But if we are genuinely to bring our (few) gifts into the greater church, then the married priesthood is crucial.

A married episcopate can wait - though I have heard some Orthodox bishops say that they wish they had the possibility of consecrating married men. On this, though, the concession about Ordinaries not necessarily being bishops is quite enough for the moment.
Posted by Edwin at 08:30 1 comment:

We began with escape clauses; perhaps the C of E will still do the decent thing? Perhaps the Holy Father’s offer will get Synod trumping it by giving us a Free Province? Even as this was being said, I watched a squadron of blue pigs performing aerobatics round the ceiling of the Assembly Hall. We soon came down to reality; the reality of a Church of England hell-bent on ridding itself of dissenters like us. They have offered us nothing, nor will they. 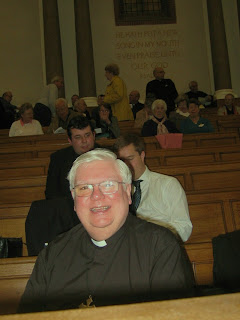 Blogmaster General and Regional Dean for Scotland, Fr Len Black SSC, preparing to put us on air as the Assembly gathers in Westminster: on the wall behind him the words (which became almost the motto of the Assembly) "He hath put a New Song into my Mouth".

Then, on Saturday afternoon, my spirits were restored. Four young men addressed us, two already ordained, two preparing for ordination. One of the ordinands is soon to be married; the other had hoped that one day he might be married; but it was not a near prospect, and that might mean he would have to remain single in the Ordinariate. All of them are ready and eager for us to press ahead, as a body, and seek corporate re-union with the Holy See, whatever the personal cost to them or their families – and the cost will necessarily be greater than to any of us older clergy and lay people..

On Sunday I was with a faithful congregation in Porstmouth, facing the prospect next month of another interregnum because of the illness of their priest. They were concerned, of course, about the future; but they were also thrilled at the prospect of becoming what they had always wanted to be, Anglicans in full communion with the Holy See.

I also heard this weekend of the death of two friends; Fr John Heidt, whose son Michael had been at St Stephen’s House when I was Principal there; and Fr John Davis, who had taught Old Testament (and a great deal more, such as the delights of Lamb in Gin) to a succession of ordinands. It is as though their lives are laid on the altar as an offering for the Unity of the Church. May they rest in peace.

Of course it is a confusing time, full of ‘what if’s’ and ‘shall we be able?’. But it is a also for me a time of huge hope, for a reunion to which I so long looked forward but never thought I would live to see. Thanks be to God!
Posted by Edwin at 18:41 5 comments: