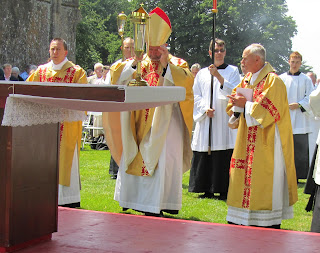 I have put some pictures from today on 'The Anglo-Catholic' blog, and tried to tell those who follow that publication a little about Glastonbury. I first knew it as an ordinand of the dicoese of Bath and Wells, and from parishes in Portsmouth and Guildford used to go regularly on Pilgrimage. In those glory days the crowds were numbered in thousands rather than hundreds; but then, too, many from middle of the road Westcountry parishes would join us, and the parish church of St John the Baptist made us all very welcome. Not so now. Indeed on one fairly recent occasion the parish 'priest' (ess) decided the time of the Mass in the Abbey ruins would be the ideal time for bell-ringing practice. Now the little town, whose streets used to be lined with enthusiastic locals and holiday-makers is filled with shops selling magic crystals and books proving that the Tor where Abbot Whiting was martyred is on an important ley-line and all to do with the age of Aquarius. It even seems that the cultism of the place can be dated to the arrival of women in the priesthood; that probably that is just a canard 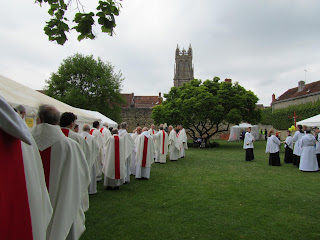 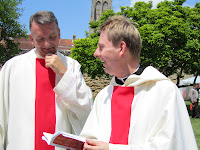 At all events, there are a few more pictures so you might like to spare yourself the trouble of going to 'The Anglo-Catholic' and looking at them here. The Bishop of Plymouth was chief celebrant, Fr Darren Smith of ACS - here chatting with Fr Jeremy Winston of Abergavenny - made a plea for more vocations (without saying where those vocations might lead) and the Bishop of Bath and Wells sat throughout the proceedings and graciously blessed us after Mass. 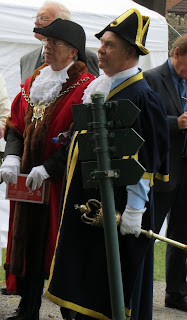 He also welcomed the Mayor and Corporation of Glastonbury.

Unaccountably, the Bishop did not make it into the Civic photograph.

The sun shone - but not too hotly, which was a relief - and Somerset was at its glorious best. If it can keep dry for the Festival, they will have a marvellous time. Already the notices of traffic delays are posted and diverse young stewards are taking up residence to direct the hordes. Good if we could have just a few of their number at the Pilgrimage.
Posted by Edwin at 22:17