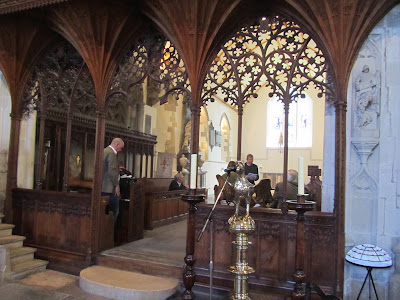 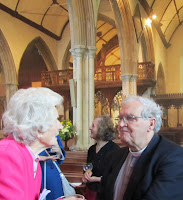 First Sunday off in many weeks, so we celebrated Fathers' Day (Fathering Sunday?) by worshipping in a favourite church, St Martin's, Salisbury. It chanced to be the 57th Wedding Anniversary of Fr Duncan Whyte, who assists there, and also his wife's birthday, so we joined in the merriment.

A very pretty side altar 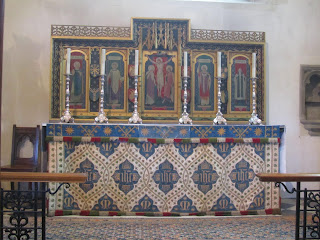 Fr Keith Robinson, the Rector, had a brief PCC meeting in the chancel after Mass, so you see him [in the first picture at the top of the page] with the eagle competing on mike. The church spire was intended as a trial run for the much taller spire on the neighbouring Cathedral. That is from the 14th Century. Three hundred years ago it was surveyed by Christopher Wren, and found to be 13ft off centre. It still is. Incredible that it stands, built as it is on boggy ground with scarcely any foundations. The Spire was an afterthought; there was meant to be just a central tower. 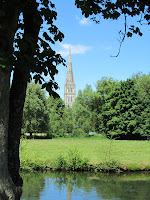 We met several old friends, in particular a priest's wife visiting from Cornwall. We'd hoped to escape horror stories by going to St Martin's but she told us of her experience in Truro Cathedral. They live near Bodmin, but there is no longer any catholic presence in any Anglican church nearby. So they took themselves to the Cathedral. A woman priest appeared, vested for mass, so they quietly left. Our friend then wrote to the Dean asking whether he might not announce who was to be the celebrant. He duly consulted with the Chapter, and said, "No". So much for the honoured place which traditionalists are meant to have in the Church of England, when their own cathedral is determined to make life intolerable. Yet we are being told once more that a 'Statutory Code of Practice' will look after us. It will not. Nothing short of bishops with jurisdiction will do; and that we shall not be given, no matter how Synod wriggles at its meeting next month. Oh, hurry on the Ordinariate! 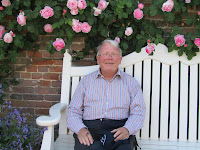 The day was completed with lunch at a riverside hotel overlooking the Cathedral, and another visit to the gardens at Mottisfont on the way home.
Posted by Edwin at 18:13