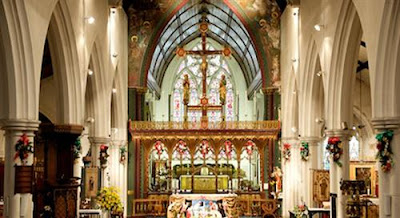 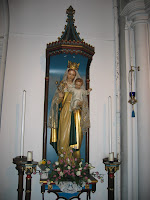 So you want a Catholic Anglican Church? There are half a dozen to choose from, all in easy walking distance here in Brighton. How unlike almost any other place in England! It takes forty minutes (mostly on the Motorway) to arrive at our place of worship, one of only four traditional catholic CofE churches in the entire diocese of Winchester. So this weekend was a great treat, to be able to walk fifty yards from Fr Fayers' gracious Vicarage to say the office in St Michael's, and then to go not much further down the hill for mass in his other church, St Paul's. 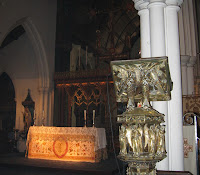 It was their anniversary of Consecration; the first preacher in the pulpit of St Paul's was Archdeacon Manning ... before he became a Cardinal. My sermon was also about change in the Church.

Jesus said, “Woman, believe me, the hour is coming when you will worship the Father neither on this mountain nor in Jerusalem.” (St. John 4.21)
In retirement you get asked to do some strange things. A year or so ago there were celebrations at Beaulieu; they call it Beaulieu Abbey, but it is nearly five hundred years since it was an Abbey. Today it is the seat of the Montague family, heirs to the Earl of Southampton w