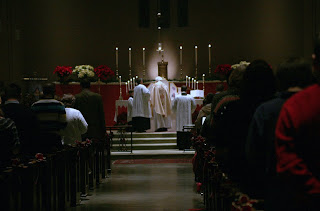 A visit by Fr Allan's Bishop
the Most Reverend Kevin W. Vann, of the Diocese of Fort Worth 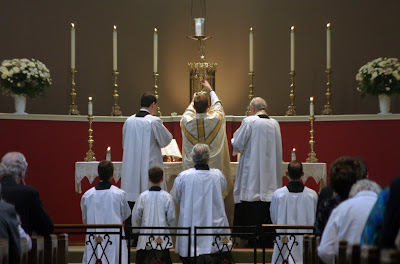 Fr Allan Hawkins has now sent some more pictures; and, since they are worth 1000 words, here they are. The Roman Mass according to the Anglican Use, as celebrated in St Mary the Virgin, Arlington, Texas. He reminisces about changes in liturgy.

"You and I have lived through an age of liturgical fidgets -- we have used 1662, 1928, Series 1, Series 2, Series 3, the English Missal, the Interim Rite; but, unlike you, I have been spared the Alternative Service Book and its current successor. When I was at St Mark's, Swindon, I found myself in agreement with the general push towards modern liturgy -- and so we used sometime the Novus Ordo, but mostly Series 3 adapted so as to coincide with the modern western rite. The reason for this was -- so I believed -- that the priority there, in the town of God's Wonderful Railway, and where the letters G O D meant the Good Old Days, there was an urgent need to bring everything in modern times and to find ways, if possible, to speak to modern hearts and souls and to try to call a halt to a habitual living in the past (not just ecclesiologically, but in every aspect of the life of that community). The need here, of course, is quite different: there is a constant need to connect with roots and the heritage. In other words, I am saying that these decisions and choices are going to be essentially pastoral and evangelistic. Bottom line: we need to have both forms available to us -- hopefully along the lines I suggested in my previous message".


So Anglican Use Catholics have available to them the Roman Missal, and also a rite which takes a good deal from Anglican formularies. Were this Provision to be extended to this country, it would be interesting to see just where our priests would pitch it: I hope we can get Fr Allan to expound further on his experience as a former Anglican, not processed through an ultra-montane sausage machine.
Posted by Edwin at 16:26