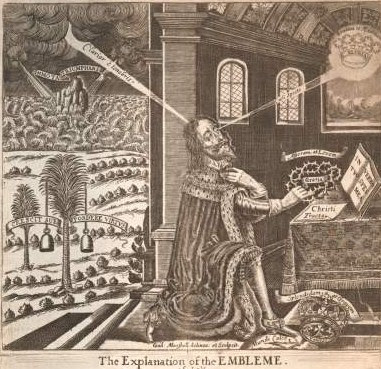 Concerning Eikons - the picture above being from Eikon Basilike of Charles I.
Life has been busy; daily masses either in Lymington or with the Ordinariate, and my first Funeral Mass as a Catholic. So I am turning to that great stand-by of clergy bloggers, the sermon. Today's, preached for the Southbourne Ordinariate Mass, concerned Jesus' response to the Pharisees.

Whose head is this? Whose name? [MTT xxii.20, JB version]

We’ve heard a good deal about our Anglican Patrimony these last months; without ever discovering just what it includes. Surely one element is the desire to find out just what Scripture really says. Fortunately, those of us who have become Catholics in the past year have joined the Church just as she too is concerning herself with the real meaning of words. That is why the new translation of the Mass seeks to be much more accurate when it quotes the words of Holy Scripture; for instance “Behold the Lamb of God”, quoting John Baptist, rather than the old words “This is the Lamb of God”.

So far, in the readings from Scripture we are mostly using the Jerusalem Bible – but the Church has authorised other versions, and one, the Revised Standard Version, is usually far more accurate than the looser paraphrase that we hear read – this morning, for instance. Now often the differences don’t matter that much; but sometimes we miss something really important if we do not have an accurate translation of what Jesus said.

We heard him say today, holding up the denarius, “Whose head is this; whose name?” Sorry, that is not what the Greek of the New Testament says. He asks about the EIKON: and eikon does not mean “head” – the Greeks had a perfectly good word for “head”. No, EIKON means an image, a representation. It is a word which keeps coming up throughout the Bible.

In the law given to Moses, for instance, we’re not forbidden to make heads: we are forbidden to make images; in the Greek version of the Old Testament that word is EIKON. But there is an even more important place where the word is used – and even the Jerusalem Bible translates it properly there. In the very first book of the Bible, Genesis, we read how the Lord decided to create human beings; and he said, “Let us make man in our own image”. And, just as he had decided, “God created man in his own image: male and female created he them”.

So back to today’s Gospel. The Pharisees have been trying once again to trap Jesus; we have heard about the way they went about trying to trap him in the Gospels for the last few weeks. Now it’s ‘Is it right to pay tribute to Cesar or not?’ Say yes, and he will be branded a traitor to the Jewish people. Say no, and he will be reported to the Roman authorities as an agitator. Catch 22, you could say. So Jesus asks for a coin; not just any coin, but the one they paid their taxes with. Until the Roman invasion, the Jews had had their own coinage, and in obedience to the law of Moses, those coins did not have any human face depicted on them. The Romans were having none of that second-rate stuff; only good Roman money would suit them, so the taxes had to be paid in Roman coins … which to a good Jew would seem blasphemous, with its picture of the Emperor. They hand Jesus a denarius. Whose head is this, he asks; no, he doesn’t, he asks WHOSE EIKON, whose image is this? Whose name is here, he asks? Well, no he doesn’t, not exactly; he asks whose EPIGRAPH, whose WRITING, whose SIGNATURE is on the coin?

'Caesar’s', they answer. 'Very well then, give back to Caesar what is Caesar’s; and to God what is God’s.' Fine, that means we have to pay our taxes. But what about God: what are our dues to Him?

Look round you. Whose IMAGE, whose LIKENESS do you see? On the coin there is just one face: around us are many faces – the faces of our fellow human beings. In the image of God made he them; male and female created he them. Each of us carries God’s likeness, not in our pocket on a coin, but on our faces. And what inscription, what signature, appears there? Well of course when we were Baptized we were given a signature; we were signed with the Cross. That is the epigraph, the signature, on us.

So if we take the Bible seriously, and try to discover what it really says, we will find many connections like this, links between the New Testament and the Old, which will enlighten our understanding. We think we know the Bible so well. To be honest, we can even get a little bored hearing the same stories time and again. But if only we will work at them, seek out the connections, discover the echoes from one Book of Scripture to another, we shall constantly find new treasures. And Jesus tells us that the wise house-holder is the one who brings out of his treasures things old and new. This does not mean that each of us needs to learn Biblical Greek to understand; all we need is a good version of the Bible, preferably two or three, to compare them; if your Bible has footnotes and references, so much the better. Look them up, and follow the links.

So - just a coin; we handle them every day. The one Jesus took to show the crowd, though, taught us more than we supposed. Render to Caesar the things that are Caesar’s – pay your taxes, even while you grumble about it. But render to God what belongs to him - and what is that? It is us, made in his image, our bodies designed to be temples of the Holy Spirit – here we offer and present ourselves, our souls and bodies, to be a reasonable, holy and living sacrifice…. That is from the Anglican prayer book, part of our patrimony; and it echoes Our Lord in today’s gospel; render to God the things that are God’s. So often we judge people by their wealth; the image of Caesar in their pockets and their bank accounts. Far more important, how they care for the image in which they are made – the image of God himself, the image we shall offer back to him at the last.
Posted by Edwin at 22:23