Blogs are a little thin this silly season; so, like some others, I am presuming to post this morning's sermon - chiefly because it enables me to give you a picture of the delightful Ms Pollard.

'If anyone wants to be a disciple of mine' .... A sermon for the Ordinariate Group in Southbourne

But how hard it was for Peter to discover what discipleship entailed. In last week’s gospel, he must have been so elated. He had said that he believed Jesus was the Christ, the Son of God; and Jesus had told him “You are Peter, and on this rock I will build my church”. Wow! Terrific! We heard that a week ago, - but in St Matthew’s gospel what we read last week is immediately followed by the very different words Jesus had for Peter today. Then he was the Rock, a firm foundation; now he is the Tempter, Satan’s agent. What a come-down.

Have you noticed that so often a great spiritual experience leaves us vulnerable to the devil’s attack? Some will have found it like that after pilgrimage to a holy place, Fatima or Walsingham or Lourdes – a terrific high, followed by a real low. Others of us will have been oscillating wildly ever since the start of the Ordinariate – or rather, if you are like me you will have done. It is a wonderful offer the Pope has made, and it is great to respond, yeah, but… 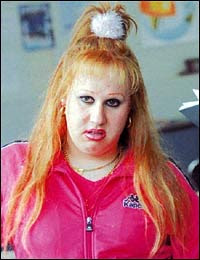 We’re a little like Vicky Pollard – 'yeah but, no but': we are trying to justify ourselves. Those buts, those hesitations, are very understandable. 'If anyone wants be my disciple' says Jesus, 'he must deny himself – renounce himself - and take up his Cross, and follow me'. And all the time we are wanting to excuse ourselves, give our reasons for finding things so difficult .. yeah but, you see, it’s the others… not me. Well, we do not have to answer for anyone else. Only for ourselves. And we do not have to waste our breath making excuses; just admit how time and again I am the problem; not someone else, but me. What’s more, I am the only one who can do anything about it.

So back to Peter. Flattened, quite deflated; one minute told he is reliable as a rock, the next being compared to Satan himself and all just because he was trying to help and tell Jesus that the future he foretold of suffering and death, he must avoid at all costs.

Peter might have learnt his lesson; but he did not. In the garden of Gethsemane, first he fell asleep when he was asked to watch and pray. Then he drew his sword on the high priest’s servant, and once more the Lord had to tell him off. Worst of all when it came to it, he was the one who denied Jesus, said he did not even know him. Yet the Lord restored him, made him into a shepherd, told him to feed his sheep; told him how once converted he must strengthen his brothers.

But Peter did not change all at once; and even after the resurrection we find Paul telling him off for falling back into the old structures of Judaism.

If anyone should be able to encourage us as we go through the ups and downs of helping to establish the Ordinariate in England, it should be Peter. However often we fail, it seems Peter has done as much before - and yet still he is the one Jesus relied on, and relies on still in his successor. And Popes have failed too. Our fallings out, our mistakes, are necessary. We are to learn from them. Of course we have given up so much; our beautiful churches, our established place in British society, the people we knew so well and who were so supportive – and now seem so distant. But it is all right. These are such early days.

Think back, if you are a parent, to the baby days of your children. It was all so exciting; but you made so many mistakes. Would your child ever forgive you? Well, they did, and they do – just as we forgave our parents though they seemed unfair to us at the time: and they forgave us, though we were so rebellious and unloving. We forgive one another, because Christ first forgave us. We come to love one another, because he loved us first. He is the one who has given us the opportunity of finding him in the fullness of the catholic faith.

Peter was meant to be a rock; no one knew better than he did that often he failed, and had to be forgiven yet again. Perhaps though that is Peter’s greatest gift to the Church; showing, not just saying, that he knew what it was to be forgiven - not just seven times, but seventy times seven. He wept over his own inconstancy, over his impatience and readiness to blunder on without thinking. But Our Lord saw in these traits of character, the things Peter thought of as his failing, the very things that he needed to build up his church. He did not come to call the righteous, but sinners – sinners like Peter and James and John, sinners like you and me and all of us in church today. Not many wise,not many mighty, just ordinary old sinners like you and me.

And see how today’s gospel ends; ‘the Son of Man is going to come in the glory of his Father with his angels, and, when he does, he will reward each according to his behaviour’. For all of us, just as for Peter, that behaviour will require constant repentance, constant forgiveness. It was a way of life for Peter as it is for us. In the end, though, Peter was faithful, and heard the words “Well done, good and faithful servant; enter into the joy of your Lord”. May those words welcome each of us too, when all the trials of this life are over, and we shall have gone a little to way renouncing ourself, taking up our cross, and following Him.