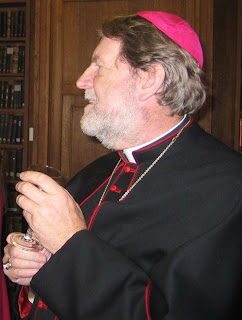 + Andrew Burnham, Bishop of Ebbsfleet and PEV for the Western half of Canterbury Province, has published the third of his series of pastoral letters. Since I am constantly being asked how things are going towards the Ordinariate, and constantly have to say "Be patient; wait on the PEV's", now that a PEV has spoken, it is good to be able at last to quote direct from the horse's mouth:

I am hugely grateful to Bishop Andrew for spelling this out. I think there are still some questions; for instance, I hear from isolated Anglicans who want to belong to the Ordinariate but can find no group near them which they can join. That is something for all the PEVs, and the Ordinariate itself, to tackle with urgency. Perhaps they already have the answer; on Friday there is to be a meeting for clergy in London which might make things clearer. Meanwhile, keep the prayers going. The Holy Father's visit has been a wonderful encouragement. He has given us the offer of the Ordinariate. We must not let him down.
Posted by Edwin at 17:04