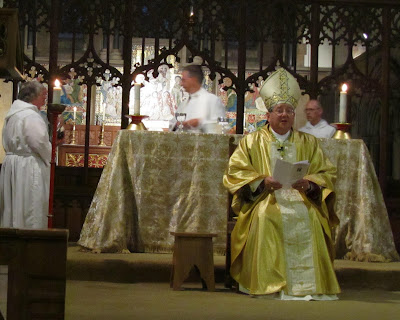 Bishop Keith Presiding: Fr Woodman setting the Altar
Once again the powers that be have downgraded a major parish by licensing a priest in charge instead of inducting a new Incumbent. This time it was in the Parish of SS Peter and Paul Fareham, and I am not sure what the excuse was for suspending the living. Something, no doubt, about 'pastoral reorganisation'; or perhaps the diocese in in the process of selling off the Vicarage, and does not want there to be an incumbent with the power to stop it. Fr Christopher Woodman SSC comes to Portsmouth from Chichester diocese.
The parish has fairly recently passed the third resolution, so Bishop Keith was there resplendent in cloth of gold to celebrate the Mass. The licensing took place within the celebration, but instead of simply getting over the legal requirements we were subjected to the CofE's notion of 'commitment': to Renewal and Growth - a little walk to the font where a Churchwarden had to say "We, the people of this parish, for our part must, by word and example, encourage those who are baptized to be active .... and so on and so on." Then, a walk to the Lectern (there being no pulpit - is that legal?) and another little quintet (it would be better set to music) for Bishop of Dorking, Area Dean, Priest-in-charge designate, churchwarden and lay chair, leading into another choral offering by The People of The Parish "We will, with the help of God".
Kenneth Stevenson, lately retired, was of course a leading light in modern liturgy, so no doubt most of these golden phrases came from his erudite pen. The See is now in vacancy, and it was for the Bishop of Dorking, Ian Brackley, to operate (for the last time, he said) as Commissary.
We had further commitments; to Prayer. As I recall this used to happen at a litany desk; you don't come across them much nowadays, so the procession was to "the body of the Church" - that is to say, the Nave. 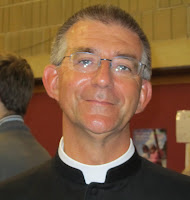 The bit about the Eucharist was called "Commitment to Unity". This had been the theme, too, of Bishop Ian's sermon; how the parish must play its part in the town and among the other parishes. The catholic element in the CofE was very important, he averred, and "we" were doing everything to enable catholics to remain loval Anglicans. Bishop Keith did not look terribly enthralled by what the Commissary was saying - and told him so in very direct Liverpudlian after the mass.
The new P-P

I did notice one happy phrase; something about "Don't just find the beauty of holiness in catholic worship: find the beauty of human beings touched by grace" - it was a faint echo of Frank Weston's words at an Anglo-Catholic Congress. But of course what Weston envisaged was a Church of England reclaimed for the Catholic faith. Since that is now no longer possible, we must all look elsewhere to find our Catholic home. 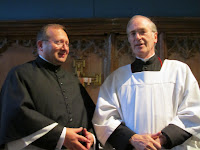 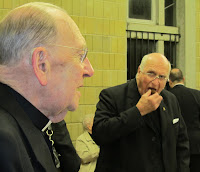 It was good that there were SSC brethren there to support the new parish priest. Fr Graham Smith, local Vicar of the Chapter, assisted at Communion. Fr Ron Gwyther, the ancient of days, has helped greatly in the parish for many years, and it was good to see him in conversation with Fr Kenneth Forster. Kenneth had been an NSM priest in my Hull parish decades ago and now he too is landed in Fareham, where he has family. Good, too, to have Fr Waller from S Saviour Walthamstow gracing the procedings.
Altogether, a curate's egg of an evening. Some good hearty singing - but a turgid bit of Taize, a well-ordered Mass, and at the heart of it those increasingly impossible claims that "The Church of England is part of the One, Holy, Catholic and Apostolic Church". I hope Fr Woodman kept his fingers tightly crossed as he made the Declaration of Assent.
Posted by Edwin at 11:59