Watching me watching you

Sometimes a word or phrase leaps out from a familiar Gospel passage and demands attention. That is how this little sermon came about, preached yesterday at St Francis' Bournemouth. For lack of any fresh expressions for this blog, this will have to do. 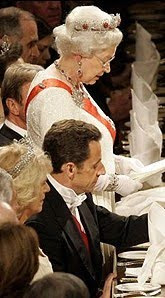 The Queen must suffer this whenever she eats in public; being watched closely. Unlike her predecessors, though, she does not eat all her meals with thousands milling around. Earlier English monarchs had to be visible – even if it meant hordes surrounding them when they walked out, or when they ate. For our present Queen, it will mostly be State banquets and such when her eating habits are on view. Queen Victoria’s family and guests had good reason to watch her; she ate very quickly, and once she had finished a course everyone’s plate was whisked away – so woe betide you if you were a slow eater! But we know they watched Jesus in order to find fault with him, or his disciples. “Why do your disciples eat with unclean hands?” they asked on one occasion. Today, though, he turns the tables on them. They have been watching him, but he has been watching them, too. And he has seen how they have been looking for the best seats for themselves.

Even his own followers were prone to do this; you remember how the mother of James and John asked for them to be given the chief seats in the Kingdom. Today, Jesus tells the story to bring them, and the Pharisees, to their senses. It is the story of the wedding feast.

Now James and John had been looking for the best places in the Kingdom of heaven: and Jesus might have been referring to this today, for the wedding feast is often the picture he gives of the Kingdom. So, for instance, the bridesmaids must be prepared for the arrival of the bridegroom even if it is in the middle of the night; they must have oil for their lamps. If they are un-prepared, they may be left outside. Then again, when you are invited you must not make excuses, or others will be called, even from the highways and byways, to fill your place.

St Paul uses the same picture; he speaks of the love a man has for his wife, and then says “but really he is speaking of Christ and his church”. The marriage of the lamb, the bride coming down from heaven in all her array, throughout Scripture there are pictures of weddings; and the first miracle Jesus did, which led his disciples to believe in him, was at a wedding feast in Cana of Galilee.

Today, as so often in the gospels, Jesus is eating and drinking. He had been invited, S Luke tells us, by “a leading Pharisee”. It was at a meal like this that the penitent woman washed his feet with her tears, and dried them with her hair; when the Host, again a Pharisee, remonstrated with him, he reminded him that he had not even offered the courtesy of ordering his servants to wash Jesus’ hands when he arrived. Perhaps there was a similar discourtesy on this occasion – at any event, Jesus witnessed the pushing and shoving that went on among the guests to grab the most important seats: the ones nearest the host, the ones above the salt. So Jesus teaches his hearers how humility is what is most needed in the kingdom of heaven; the readiness to take the lowest place. He went on, though, to teach his host a lesson. This important Pharisee was showing Jesus off to his influential friends, fellow Pharisees, maybe even some of the occupying Roman officers. Friends, rich neighbours, close relatives. Certainly these are the people Jesus goes on to mention.

When you give a lunch or a dinner, he says to this important Pharisee, don’t ask the sort of people who are here today; friends and relations, rich neighbours; because they may repay your hospitality by asking you back in return. But of course that is just what the Pharisee wanted. His dinner parties were times for cementing business relationships, keeping in with the elite, schmoozing, as they say, with men of influence.

If you want your hospitality really to achieve something worthwhile, invite those who can’t ask you back; the poor, the crippled, the lame, the blind. You will certainly be repaid for asking them to your house; but it won’t be the sort of repayment expressed by the business ethic of “you scratch my back, I’ll scratch yours”. We are to give without even letting our right hand know what our left hand is doing. It is to be a humble action, like sitting in the lowest seat at table. Feeding people who can never do anything for you is a real blessing; that they cannot pay you back, says Jesus, is fortunate; because repayment will be made to you when the virtuous rise again.

So we don’t know any blind people, or poor, or lame? Oh but we do, we see them in every newscast, from Niger or Sudan or Pakistan or Bangladesh. We are so fortunate; we have such opportunities of helping other people, and they will never be able to repay whatever we do. And, says Jesus, inasmuch as you did it for the least of these my brothers, you did it for me. Lay up for yourselves treasure in heaven, it is more worthwhile than any dinner party circuit.
Posted by Edwin at 08:31