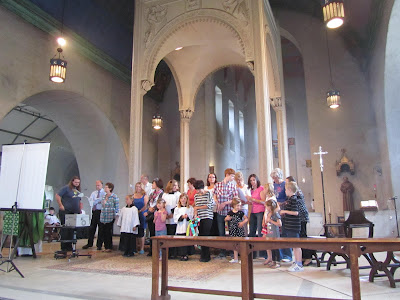 A big daunting space for little performers
Parishes in interregnum have to struggle to keep afloat. When they are A, B and C parishes, the struggle is far harder. All credit, then, to parishes which are not content just to keep things as they were, but are ready to reach out beyond the faithful into the local community. 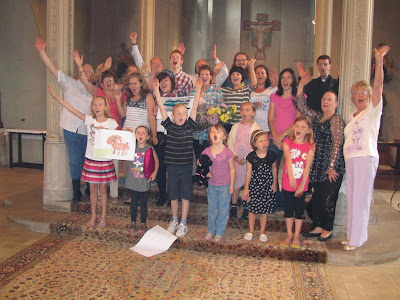 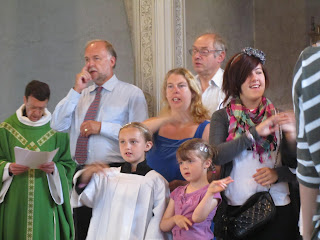 That, the Churchwarden told me this morning, was one of the reasons why at St Francis' Bournemouth they were determined to put on a children's teaching week. These have happened in the past, but they have depended heavily on the enthusiasm and commitment of their former incumbent and his wife.

Today, I was warned not to prepare a sermon; some of those who had taken part in "Lift-off" would be presenting the congregation with a taste of what they had been doing over the previous six days. There are pictures of their presentation here - but they are static and without the enthusiastic singing and dance which made the morning, as one lady said to me after Mass, "very lively". The theme was servants of God; from Noah to Our Lord Himself, with references to Joseph and many other heroes of the faith.
There had been many more participants through the week; but non-church-going parents found ready excuses not to let the children attend this morning's mass. That is a great pity,for they missed a lovely morning. It was not just the young participants who enjoyed it; there were older members of the congregation, and a very lively group of teenagers, who threw themselves into it with gusto. I hope the diocese will note what occurred in St Francis' Charminster Road this past week. Perhaps they will even put a tick in the box marked "fresh expressions". What is more, it happened with the participation of the locals, including several of t 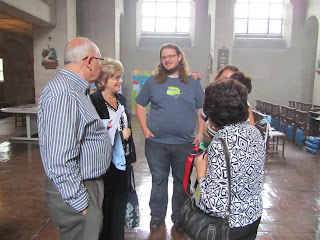 he choir and servers and the Churchwardens. This is the sort of parish which General Synod has recently attempted to vote out of existence. What they should realise, though, is that these are transferable talents; and many of the congregation heard a talk last week from an SSC Priest on the Ordinairiate.
Music Maestro with admirers after Mass
Posted by Edwin at 17:08