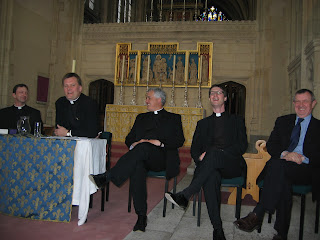 A full house at Pusey today to hear papers on Anglican Patrimony. For me, it was pure delight seeing and hearing Professor Eamonn Duffy in the flesh. He took us on from his recent account of the reign of Mary and began to put us right about the Elizabethan bishops. But for Elizabeth, there might have been no choral tradition, no cathedral choirs, no chapels royal. The bishops were iconoclasts and protestants, seeing the Church of England as simply a local part of the European reformation. It was the Queen's conservatism that ensured a few catholic elements survived in the Church of England which would enable later generations to claim them as integral to Anglicanism.
I have to admit to a certain paternal pride in attending a conference where the Principal of Pusey House, the Fr Librarian who organised the Conference, and two of the four keynote speakers had all been "my" students. Which is to say I learned the job of being Principal of Saint Stephen's House under their tutelage.
Canon Dr Robin Ward spoke of the Anglican Tradition of Moral Theology. He reminded us that in the Ordinariate we would not have the licence to disagree with the magisterium. We should, though, seek to make a contribution in the WAY in which we approach Moral Theology, for instance treating it as an apsect of ascetic theology. Our approach to the Confessional too should be distinctive - for not having been overburdened by great numbers of penitents, we have had time and space to develop skills in giving spiritual counsel. 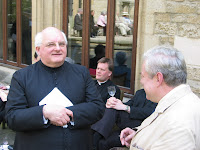 After a very generous buffet lunch and much conviviality in the Freddy Hood room and in the Cloister, we returned to hear the second of "my" former students. Fr Philip North, with his wide experience from pastoral ministry in the Northeast, at Walsingham, and now in Camden Town, sounded a note of warning. Unless the Ordinariate enabled us to continue and develop our pastoral and parochial ministry, it would not he for him. Better in that case simply convert in the old manner. Fr Stephen Bould from Folkestone made for me a most telling riposte, saying that if the Holy Father had invited us to attempt the Ordinariate, because of pleas from Groups of Anglicans, it would be churlish not to give it a go. 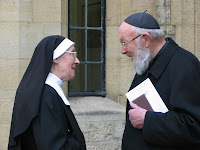 Fr David Ackerman from deepest rural Gloucestershire showed that the tradition of the scholarly country parson has not quite died out in the Church of England. He compared the systems of Canon Law in England and in Rome, and then gave what was for me one of the great insights of the day. He reminded us that Anglicanorum Ceotibus was only possible because of the Role of the Pope. He compared it with the exercise of his personal authority by a former Pope in giving permission to Francis to begin his Order of Friars. Who could have forseen what the Franciscans would become? Equally, no one can tell where the Ordinariate might develop. But this promising parallel gave me great hope. 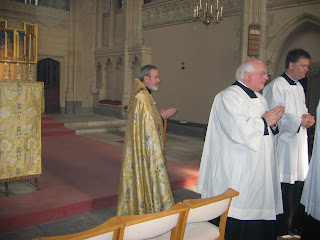 The Staff of Pusey House leave the Chapel at the end of Evensong.
We concluded the day with another element of the Patrimony, Sung Evensong. Altogether, a wonderful day. Much more is to be posted about it on 'The Anglo Catholic' site; I have put a few pictures here to show you what you missed if you were not present.
Posted by Edwin at 20:30