A Bishop's job is not an 'appy one

Two sermons today, one at our local parish church, the other at St Francis Bournemouth. I had not noticed before how the Ordinal takes the Low Sunday Gospel for the ordination of priests, and the reading for the second after Easter, today, for a bishop's ordination. So last week I said something about the authority to forgive sin, and today about the impossible task of a Bishop - to be merciful, but not to err on the side of leniency, and to administer discipline, but always with mercy. After the trip to Bournemouth and a snack lunch we went to Exbury, the great Rothschild estate, to view the Magnolias and the first of the Azaleas. Later there will be many more, together with a great flush of Rhododendrons. I forgot to take my camera, so you will perhaps be content with a little Magnolia Stellata from my own garden, to sweeten the pill of my sermon. 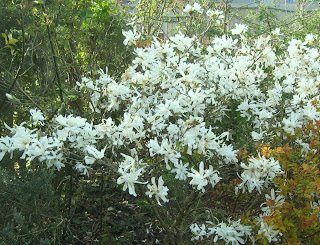 Ye were as sheep going astray; but now are returned unto the Shepherd and Bishop of your souls

When a Bishop is Ordained, the Archbishop hands him a Bible with these words; 'Be to the flock of Christ a shepherd not a wolf, be so merciful that you be not too remiss; so minister discipline that you forget not mercy'. If that is required of a bishop, how much more of the leader of an entire communion, an Archbishop of Canterbury, or a Pope?

It is possible that Archbishop Rowan has been breathing sighs of relief lately, with the attentions of the media turned from him to the Pope. I doubt it, though. Our Archbishop will know very well that if the press and television have left him in peace for a while they will return to him with renewed malice once this spell of baiting the Pope had run its course.

Our journalists seem always to delight in building someone up in order to knock him down again. Nick Clegg should be feeling very worried just now. After the televised debate on Thursday, the pundits were saying how well he had come out of it, how much better than the two other party leaders – so not doubt by the time of the election they will be merrily trampling on his reputation and saying what a disappointment he is.

Anyone who cares to look at the facts, and they are readily available on the internet and in some of the more careful press reports, will know that the recent frenzy about Pope Benedict is ridiculous. Far from covering up incidents of child abuse among the clergy, he has done more that anyone to discipline such priests, remove them from office, and instruct his fellow bishops to report any such matters to the police. But the truth is not often what interests the media, or those who hate Christianity.

‘Be so merciful that you be not too remiss; so minister discipline that you forget not mercy’: it is a hard line for anyone to follow, this balancing of justice and mercy. The courts try to do it, and often fail. Our bishops and others in authority try, too. Sometimes they fail – but they need our support in what they are attempting, rather than our ridicule when, in our view, they do not get things perfectly right.
Posted by Edwin at 18:57