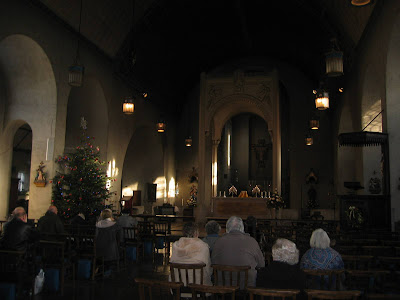 Winchester Diocese has only four 'Resolution C' parishes - yet in the depths of the bitter cold, forty and more hardy souls turned out to talk about the Ordinariate. We began with Mass - in typical Anglican fashion, it was the Mass of the Day, Eucharistic Prayer 2 from the Daily Missal of the Western Church. A said mass, with hymns. All credit to Fr Berrett and the faithful of St Francis' to provide an organist, a small choir, and a couple of servers. 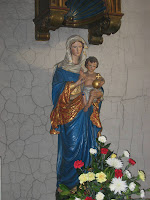 After Mass, Our Lady was invoked with the Angelus, and we proceeded to the Hall (beautifully warm) for a speech by Mr Toad, aka me. If you should want to hear my maunderings, they are available by a link from the parish website .. http://www.stfrancis-bournemouth.org.uk/
There were soup and wine to complement our own picnic lunches, then we had over an hour of discussion. An ear infection rendered me more than usually dense, but the feeling of the meeting was incredibly positive. Some few are determined to stay in the CofE come what may, to fight to the bitter end. Most of us, though, seemed to think we had had enough of bitterness, and the end was more than nigh - indeed, that 'the game was up'. Everyone expressed gratitude to the Holy Father for his initiative, by-passing both Canterbury and the Catholic Hierarchy in England; though one catholic lady who came with an Anglican friend put up a spirited defence for "the southern bishops" who had come in for a certain amount of criticism. 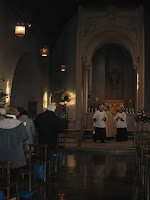 We ended, again in our solid Anglican way, with Benediction of the Blessed Sacrament. Now the parishes will themselves be considering the options, and listening to the Provincial Episcopal Visitors for the advice they give us after further meetings with the Catholic authorities. In all, today's was a very heartening event. We are very conscious that the Holy Spirit has heard our prayers down the years for Unity, and is giving us answers such as we could never have devised for ourselves. Thanks be to God for his unspeakable love.
Posted by Edwin at 20:52