It was His Grace of Canterbury who, in an interview concerning the Ordinariate, said that C of E churches were 'inalienable'. Much the same was asserted by the soon-to-be-ex-Bishop of Southwark. These churches and parsonages were the responsibility of the Church of England, he told us, so that they could minister to the nation and spread the faith of Jesus Christ according to the teaching of the Church of England. I was thinking about this as I sat in the former Rectory of the Parish of Chesil, in the City of Winchester. After celebrating Holy Communion [1662 approx] in Lymingto

n and preaching on the collect (regarding the Scriptures, 'that we may in such wise hear them, read, mark, learn and inwardly digest them' ... or was it 'hear them read, mark, learn &c'?)) we dashed up to Winchester for the 10.30 Mass in Holy Trinity. There was a pastoral letter from the Bishop of Winchester to be read in church. Our bishop pastor is the Bishop of Richborough, but we did not totally ignore what the Bishop of Winchester wrote; instead we reproduced it so that every member of the congregation could take a copy and see for himself (I use the word inclusively) just why posts are having to be cut.

A cousin of mine had been staying with us for a few days, and she kindly took us to a restaurant just round the corner from Holy Trinity - the aforesaid former Rectory (see above left). From the window you could see across the street to the Chesil Theatre - formerly the parish church of St Peter, Chesil. (below right) This was alienated in the 1960's when the Diocese of Winchester foun 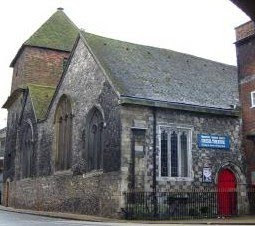 d it surplus to requirements, and allowed a theatre group to take it over. It was given the church, free, the only condition being that it must restore and maintain the fabric. In Salisbury the former parish church of St Edmund (parish church at that time of the largest parish in the City) was in the 1970's swallowed up by St Thomas', and the church handed over to become the Salisbury Arts Centre. You can find innumerable similar 'alienations' - Chichester, Bristol, Norwich just to name a few of those I know personally.
Now, with Winchester so overchurched, and with such good precedents for alienation of property, we look forward to hearing that those of us who join the ordinariate will be assigned Holy Trinity Winchester. Better surely to be a Christian Church than a night-club - or even a Theatre.
So here is my effort for today from Holy Trinity:
In the fifteenth year of Tiberius Caesar S Luke 3.1

This is the start of things, the beginning of Jesus’ ministry, and S. Luke wants to pin it down as a historic moment. Even today, official documents such as Acts of Parliament are still dated according to who is on the throne at the time - “in the 57th year of Elizabeth, by the Grace of God Queen” and so on. Luke though is being very particular indeed. Not enough just to mention the rule of Tiberius Caesar. He goes on to say it was “When Pontius Pilate was Governor of Judaea”. Now that, you would think, is precise enough; not so – he continues ‘Herod was tetrarch of Galilee, his brother Philip tetrarch of the lands of Iturea and Trachonitis, Lysanias tetrarch of Abilene’ … so that is all Roman rule described in and around Galilee; but Luke is not just writing for Romans; he then gives the Jewish dating, it was “during the pontificate of Annas and Caiaphas”.

Some of these characters, some of these places, do not feature in the rest of the gospel. Others, like Pontius Pilate and Annas and Caiaphas, are very prominent indeed.Why is it that St Luke is so concerned to put the events of Jesus’ ministry into historical context, and to make such a list of people and places? It recalls another list at the start of his second volume, the book of the Acts of the Apostles. There he is writing about the people who heard the Apostles preaching in their own languages.
They were, he tells us, in Jerusalem devout men, from every nation on earth. The Holy Spirit came down upon these devout people, and they heard them speak, every man in his own language: Parthians and Medes and Elamites and the dwellers in Mesopotamia, in Judaea and Cappadocia, in Pontus and Asia….. and so he goes on, listing Egyptians and Romans, Jews and Cretans and Arabs. The Gospel is concerned to tell us that what is happening is not just some little event in a remote corner of the Roman Empire, but concerns the whole world.

Both these occasions, in the Gospel at the start of Jesus’ ministry and in Acts as the Church began its mission, are times when the Spirit comes among us. The Holy Spirit of God is not restricted; like the wind, he blows wherever he chooses.

Why is this a particular concern of St Luke? As a young man, you may remember, had been a companion of S Paul on his missionary journeys. He had witnessed how the Good News of Jesus Christ was welcomed far beyond its origins in Israel. He had seen for himself the struggles in the early church, as the apostles had to decide whether the gospel was solely for the Jews, as some thought, or whether it was for everyone. To us, living so long after the matter was decided at the very first Council of the Church, it seems obvious that the Gospel is universal. That was not how it seemed at the time.
At first, even S Peter thought that anyone becoming a Christian ought first to bind himself to the whole Jewish law. It seems laughable to us now, that we might have been denied the faith unless we first committed ourselves to renouncing pork and shellfish and to keeping all the other dietary laws, but those were very real questions for the Apostolic church. But for these decisions, we might not have been able to say that we believe in one Catholic church – for Catholic means universal, for every-one.
The matter arose like this: [Acts 15.1f] “Certain men which came down from Judaea taught the brethren, and said, ‘Unless you are circumcised after the manner of Moses, you cannot be saved’. Paul and Barnabas had no small dissension and disputation with them, they determined that Paul and Barnabas, and certain other of them, should go up to Jerusalem unto the apostles and elders about this question.”
It appears to have been St James who led them to reach a decision at this Council in Jerusalem, and the Apostles’ ruling was conveyed to the Gentile Christians like this: ‘It seemed good to the Holy Ghost, and to us, to lay upon you no greater burden than these necessary things; That you abstain from meats offered to idols, and from blood, and from things strangled, and from fornication’. At that Council, too, Peter had said ‘Why put a yoke on these disciples’ necks which as Jews we proved incapable of bearing?’
All these matters St Luke had heard about, or witnessed at first hand, in his early days as a Christian. So more than any of the other Gospel writers, he is concerned with the universal nature of the gospel. It may be this sympathy with the outsider that has Luke alone giving us the story of the Good Samaritan.

Why is this important as we approach Christmas? It reinforces the truth that the Gospel is universal, for everyone. As Simeon said when the infant Jesus was brought to him, he was not just the glory of his people Israel; he is also a light to enlighten the Gentiles. When the Magi came with gifts, they too represented the non-Jewish world. It is also in today’s message proclaimed by John the Baptist. John is preparing the way for the Messiah, so that “all mankind shall see the salvation of God”.

Our Church of England has, at times in its history, been aware of a universal mission. The great Missionary societies of the eighteenth and nineteenth centuries, CMS, SPG, SPOCK, witness to the concern of our church not to be defined simply by being English, Anglican. We went across the whole Empire, but also beyond it, taking the good news. Recently there has been a danger of forgetting this, and seeming to think that being English and being a Christian are one and the same. There has also been a sense that anything 'Roman ' was suspect. It could be, now, that the offer by the Roman Catholic church to make a home for us within it, is a challenge to this narrow view of Christianity. Are we genuinely Catholic, Universal, for everyone, or are we not? This is what we shall be praying and thinking and talking about during the coming weeks as we await advice from our Provincial bishops, and begin to formulate our response from this parish to the offer Rome is making to our church.
Posted by Edwin at 22:18