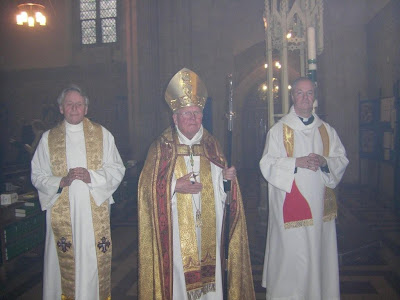 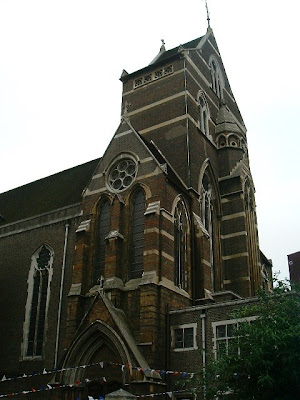 They work you hard at St SAlban's, Holborn. First they had me confirming during the 9.30 mass (at which I also celebrated and preached) and we had barely turned round before I was at the High Mass at 11 preaching in the wonderful strains of Stravinsky's 1948 Mass.

So perhaps it is worth letting my three readers in on what I said in that context. Another time you might like to know why Danish churches, to say nothing of Crown Jewels, are so besotted with Elephants... but that really is another story.

There are downsides to every job; and perhaps the biggest downside to being Monarch of Great Britain is having to open Parliament. The Queen was at it again on Wednesday; tedious enough riding in an unsprung ancient coach and wearing a crown which, she has said, quite ruins one’s hairdo. Far worse than any of this is delivering a speech written by a politician with the aim of boosting his party’s poll rating. How it must irk, to sit on a throne saying “My Government…”

But then, that is one of the things about constitutional monarchs; they have to let other people tell them what to say. Until the mid nineteenth century, Kings of Denmark were absolute monarchs. Their word was law. Here that had died out when Charles I lost his head in Whitehall. It came very late to Denmark, but when it did the result was even more thorough-going than here. The Queen might complain about wearing a heavy crown; all his life the Danish King is not allowed to wear his. It is on display among the crown jewels in Copenhagen, but the only time it comes near the king is at his funeral; then it is put on the coffin. The Danes say it is the only time when it is safe to let him wear it.

So there are monarchies, and monarchies.
Which is where today’s gospel matters so much. The question put to Jesus by his judges was “Are you the king of the Jews?” He would not answer that directly, for he would have been misunderstood. Instead he tries to get them to see what his kingship is about; and it is not a this-world kingship at all.

The proposals by the Papacy concerning a special deal for Anglicans has some marvellous things about it. The one place where it really falls down, though, concerns the trappings of bishops. In the explanatory document, the so called ‘norms’ of the ordinariate, there is this sentence:
‘A former Anglican Bishop who belongs to the Ordinariate and who has not been ordained as a bishop in the Catholic Church, may request permission from the Holy See to use the insignia of the episcopal office’.

Now it may be that that is a concession for the sake of the people who have been used to treating Ebbsfleet and Richborough and Fulham as bishops. It certainly should not be a concession for those men themselves. Once they have become married priests in the Ordinariate, even if they have a special office, they will not be bishops. If the Holy See wants them to dress up like bishops, in the way that some others do, mitred abbots for instance, then it should instruct them what to wear; not give them the responsibility of seeking it for themselves.

The experiment of flying bishops made for difficulties about ecclesiology – how could the bishop of a province be in only partial communion with other bishops? But then, that problem was not created by the flying bishops; it was there from the moment our church decided it had the authority to ordain women as priests, while at the same time saying that anyone had the right to refuse their ministry. Alongside those difficulties, though, there were great benefits which came from the experiment. None of these bishops had great establishments to maintain. They were given the means to live simply, in modest houses, with no staff of chauffeurs and gardeners and pa’s, no cathedral, no chapter. Many of those in their care came to value this; it seemed a new sort of episcopacy. It meant, for instance, that during an interregnum the bishop would drive a hundred miles or two, and would be happy to stay overnight with one of the parishioners, just in order to consult with the parish about their future and what sort of priest they wanted.
For the bishops themselves it enabled them to get to know the people in their care, not just churchwardens and PCC representatives but their families and children. It was easier in this way to learn the job of being a shepherd – and even a shepherd king. Putting on the crown, the mitre, seemed no longer to distance him from people; the mitre and crook and ring were symbols of office, and made him the king’s representative. And one PEV's demountable crook in its leather bag was referred to by a perspicacious Verger as "the tool kit".
The Imperial State Crown, the Crown of St Edward, the Orb, the Sceptre, none of these belongs to the Queen. They are about delegated authority, and the anointing at the coronation shows us all whose delegate she is. It is an anointing she shares with priests and bishops; and with all the holy common people of God in their Baptism and Confirmation.

So when he is asked are you THE King of the Jews, Jesus does not answer; but when they rephrase it, when after he describes his kingdom Pilate asks “You are a king then”
Jesus answers Yes, I am a king. A king in a different sort of kingdom from any we know on earth.

The kingdom of heaven is not like the kingdom of Elizabeth I or Elizabeth II, nor the kingdoms of Denmark or the Netherlands. All these will pass away. One of the most endearing stories about Queen Victoria is that her favourite hymn was “The day thou gavest Lord, is ended” … she must have imagined the sun constantly rising on some new outpost of Empire. As the flag was lowered at sunset in Canada it was being unfurled in India. She also knew, to her great credit, that Our Lord’s throne “shall never, like earth’s proud empires, pass away”, though it is unlikely she thought the demise of the British Empire would follow on her heels quite as swiftly or completely as it did.
But the Lord’s kingdom is not of this world, and is not subject to the fall of empires. Among the crown jewels of heaven none is greater than that of woven thorns, bejewelled with the Saviour’s blood. His rule is service, his robe of state humility. Whoever would be first in His Kingdom must be last, whoever would rule must be the servant of all. Perhaps, after all, the Holy Father will let former Anglican bishops set aside their jewellery, and put all their efforts into building up the kingdom on earth as it is in heaven.