What a good present; life membership of the National Trust. When our children were very young my mother bought each of them such a present - at that time, nearly fifty years ago, it cost £50 (and you also received a silver coin with the Queen Mother's head on it). A couple of years later I decided to buy life membership for Jane - it almost broke the bank, for by then it cost £75.  I think that's much the same as annual membership for a family today. Certainly it is the best £75 I have ever invested. 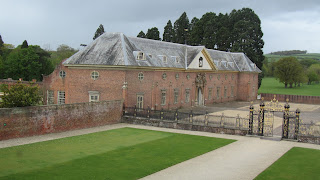 Last week we were visiting family in South Wales; so in a lull between showers we decided to visit Tredegar House. This was the seat of a fabulously wealthy early industrialist, and the house is a baroque gem, very much in the Dutch taste of Mary Stuart and her unspeakable Orange spouse. And the first picture (above) is not of the house, it is merely ths stable block. 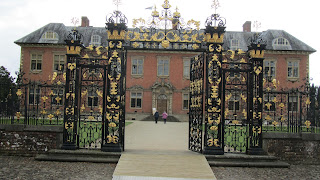 This is the House, with its marvellous restored wrought iron screen. Despite having been a school, and before that having been taken over by the military during the war, there are some grand touches to the interior. 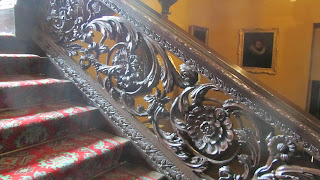 How about that for a handrail? The Trust have a fifty year lease on the house, and are doing a great job of restoring it and its formal gardens. 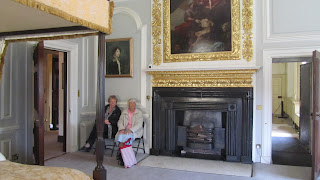 The house had a particularly notorious owner in the early 20th Century. This is part of his boudoir (he had become a Catholic to annoy his father, but his real interest was in the black arts, as practised by Aleister Crowley). Curiously the painting above the fireplace is a religious subject, Abraham preparing to sacrifice Isaac... the blameless two ladies resting by the fireplace are in the picture simply to supply scale.


As if this restoration project was not enough for NT, they have also leased another house on the other side of Cardiff. This is more famous for its gardens than its architecture, but here too the National Trust is reclaiming the almost derelict High Victorian mansion. Dyffryn was also built on the proceeds of mining and industry, like its earlier counterpart. 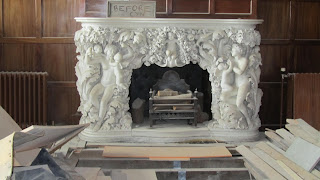 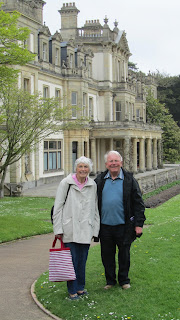 This amazing fireplace is being reinstated along with the original panelling; some of the floors are a little unfinished! The house is a wonderful amalgam of styles; here you can see an almost Palladian pediment over the garden front, with rather French Mansard roofs and an Italianate terrace. The local authority held the building and gardens for some time, and added a meeting room and other ancillary building which are quite out of keeping. We can only hope the Trust removes them before they get listed as marvellous examples of 1970's design.

So, if you are in the vicinity of Cardiff, both these houses and gardens are worth the journey. 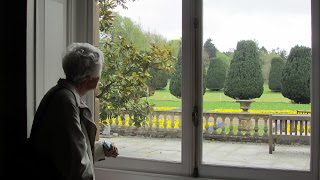 Congratulations to the Trust for taking them on - and thanks for the great bargain you sold us with life membership all those years ago. Now we are back home enjoying 'retirement' with three Masses so far this week and a couple more to come.
Posted by Edwin at 22:45