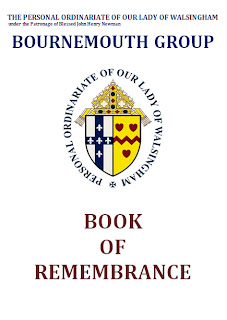 ﻿
Perhaps it was the first death in our Ordinariate Group which sparked us - or I should say one of our members - into action. Brian Harrison began collecting names and dates of deceased relatives and friends of the Group a couple of weeks ago, and today he presented the results of his labours. At the Offertory be brought to the altar this book of remembrance; and because the entire thing is on computer, it will be kept up to date. So we shall be able to remember those dear to us week by week at Mass. 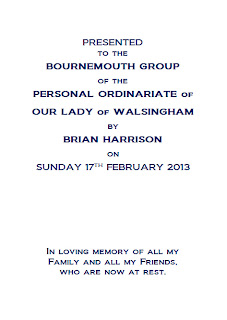 Today was important for other reasons, though. We heard that the impediment to the marriage of one of our members had been removed, so she will be able to be confirmed and receive Communion very soon. Then too we were introduced to Darryl Jordan, his wife  Lisa and Catherine their teenage daughter. They came to England from Dallas where they had belonged to the Episcopal Church. Here Darryl served in the diocese of Winchester as an assistant in the parish of Christchurch. Lately they achieved British Citizenship. Now they are all preparing to be received into the Catholic Church through the Ordinariate - and we very much hope that Darryl might be accepted for Ordination later this year. So little by little the Group grows. A little over a year ago we began with just a couple of dozen of us worshipping together. Today, joined by a few established Catholic friends, we were thirty-nine at Mass. Not spectacular, but steady growth which encourages us for the future. On Ash Wednesday our parish priest entrusted the evening Parish Mass to us, so our servers and singers and clergy helped lead the worship. On future Wednesdays through Lent we shall have Stations before the 10.30 Mass. At the end of this week we have a Day of Recollection for Lent at the Dominican Sisters' House in Sway. Some of our members will participate in the Ordinariate's Pilgrimage which will be in Rome during the Holy Father's last week in Office. Small steps, but gradually it seems we are being led towards a fuller life together, with many of the marks of a parish.
This is not said by way of boasting - we are still a pretty fragile plant - but simply in the hope that it might encourage others who until now have hesitated about stepping into the Barque of Peter.
﻿
﻿