Towards a Pastoral Council

Mgr Keith Newton summoned representatives of the Ordinariate Groups to a meeting in Oxford. The notice was fairly short, so it was good that so many of our Groups were represented at today's event, each of them sending a lay person with the Group's Pastor. We celebrated Mass in the Catholic Chaplaincy of the University (shades of Mgr Ronnie Knox, to say nothing of Brideshead...) and the rest of the morning was given over to an address by Mgr Keith Barltrop. 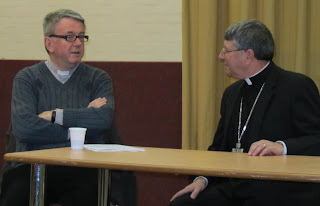 He spoke about the Year of Faith and the New Evangelisation, with special reference to the Ordinariate. He told us how it was Pope John Paul II who had listed what was to be new in the New Evanglisation. It was not a replacement for what the Parish Clergy and others were already doing.. And long before he came into office our present Pope had reminded us that the Church has always evangelised, without interruption, from the very outset; in celebrating the Holy Mysteries day by day, in the exercise of charity. "Light and warmth radiate from this permanent evangelisation" said Cardinal Ratzinger. The New Evangelisation though adds to these older methods, in an attempt to reach "the larger part of present society which does not find access through permament classic evangelisation". Mgr Barltrop spoke warmly, among other new initiatives, of the Jerusalem Communities in France and Italy which attracted so many of the younger generation. 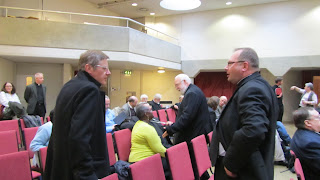 Getting ready for our second session

Then he proposed three avenues for the Ordinariate to consider:
1.  Go back to the early church; see the virtues of smallness - 'Don't be afraid, little flock'.
2.  Look to your Anglican roots; see how the Church of England has been in touch with the culture.
3.  Remember the Marian dimension: Walsingham should become increasingly important for us.

This led to a lively Q&A session, before we broke up for our picnic lunch. 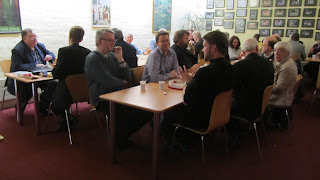 After Lunch Mgr Keith Newton spoke about the future (some of the American Ordinariate parishes are large; but they have taken thirty years from starting as Anglican Use Catholics to reach their present size; we need patience). 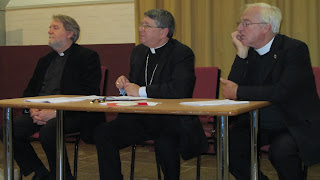 Mgr John Broadhurst helped us consider our finances (we had been more generous givers as Anglicans than we were now: we must recover that part of our Patrimony). Mgr Andrew Burnham brought the welcome news that our Customary is now published (and he told us how we might use some of its material alongside our present Office Books). 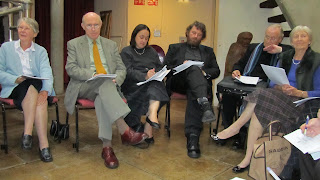 Representatives from the Southwest in a Group Discussion

For once dividing into groups proved a helpful next step; our four Groups in the Portsmouth Diocese, for instance, were joined with others from the midwest (Bath and Bristol) and the Southwest
(Plymouoth, Buckfast, Torbay &c) together with some from the South Midlands (though Reading is already well known to us being in the same diocese as us). We shared our experiences, good and not so good, and looked forward to what might help in future. 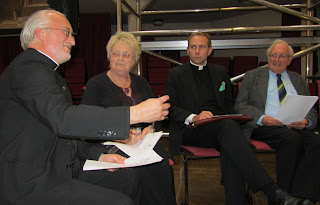 The Isle of Wight makes a telling point

Finally, we twisted a few arms to ensure that there would be good lay representation on the Council of the Ordinariate - something which for Diocesan Catholics was permitted, but for us was mandatory. Altogether a very positive and up-beat day, and (as Michelin has it) "vaut le voyage" .. well worth it, in fact.