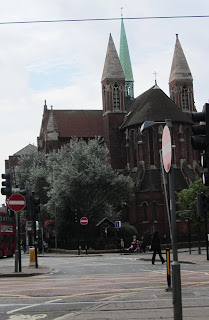 Few landmarks are left of old Croydon, the town I remember from my youth - my grandmother lived just one stop along the line, in South Norwood, hard by Selhurst Park, home of Crystal Palace football. One thing that is left, though, is St Michael's
Church. Left it certainly has been for many of those in the congregation today in St Mary's Catholic Church (just a stone's throw from St Michael's, though no one was throwing stones today). There were servers who had been at St Michael's, and some of the ladies from that parish were introducing one more element of Anglican Patrimony, the Mantilla, into Catholic worship. Fr Donald Minchew, its former Vicar, was among those ordained to the Catholic priesthood this afternoon.
Once you might still discern the little country town on the chalk hill (the meaning of Craie-dune or Croydon) among more modern buildings. Now it is distinctly part of the metropolis, and none the better for it. But today was lovely; the ordination of three priests, former An 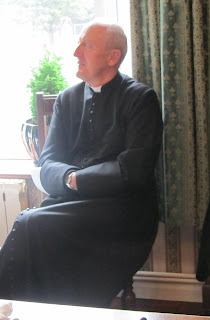 glicans, by the Archbishop of Southwark in the presence of our Ordinary, Mgr Keith Newton.

There are few opportunities for concelebrants to take pictures in church; but before the event a number of distinguished figures hove into view. Fr Lindlar from Deal (right) was composing himself with holy thoughts. In another corner of Kent, and another corner of the room, the former Vicar of St Peter's Folkestone was on his mobile - at a guess, to his bookmaker, though I might be mistaken. He could very well have been checking up on the builders, who seem to have taken up residence in the house where he and Tricia and struggling to create a home. 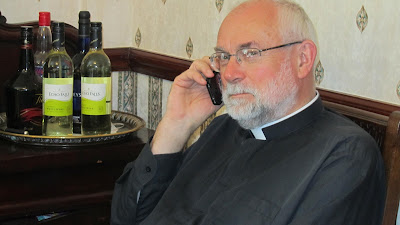 Then also from Kent were two familiar bloggers, Frs Tomlinson and Aquilina, keeping each other up to date with their parts of the Ordinariate vineyard. 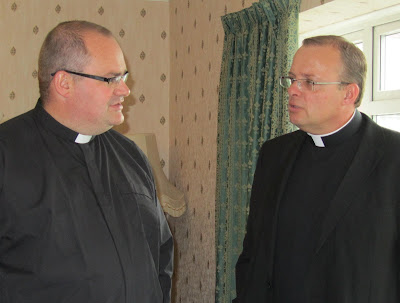 Most of those present were from London and surrounds; so it was good to have a fellow resident of Portsmouth Diocese, Mgr Robert Mercer CR, concelebrating. 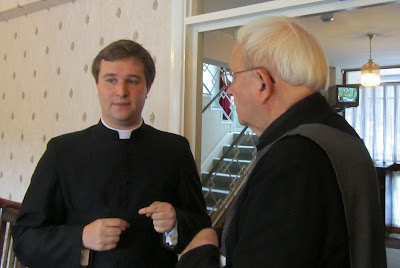 Here he is being interviewed - or possibly engaged in conversation - by our intrepid communications officer, Fr James Bradley, who will no doubt by now have a sheaf of pictures on Flickr (whatever that is). 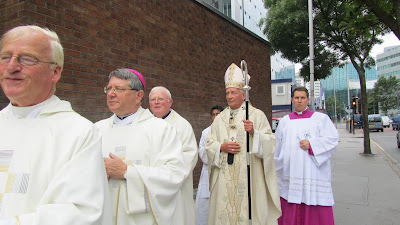 There were a few monsignori in evidence. Above on the left is Mgr Broadhurst, leading our Ordinary, Mgr Keith Newton, and the Archbishop into church. I did manage to get one shot in Church of the three Candidates, still in their diaconal stoles, as the Mass was about to begin. 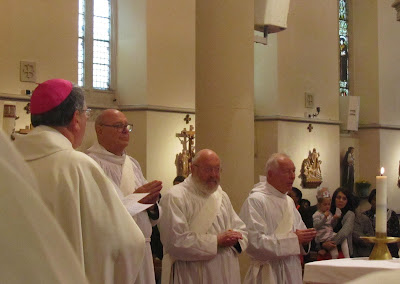 From left to right are the Ordinary, then Frs Kenneth Berry, Paul Gibbons and Donal Minchew.

It was a great occasion, with a first-rate bunfight; it made our journeying from the South Coast (setting off at 8.15 and arriving home at 19.45) well worthwhile - quite apart from sitting on a table being regaled by Joanna Bogle with tales of Croydon Airport. Altogether a great day for the Ordinariate and for the Church at large.