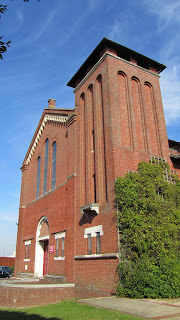 Was it cheek or ignorance which led an Ordinand to ask "Father, did you know Father Dolling?" Since that great hero of the faith had died a third of a century before I was born, I did not immediately take it as a compliment. Yet it is true that I sometimes went on a little about Robert Dolling's work in Portsea. One of my home Communicants had been prepared for Confirmation by him, so I did feel a real link with this Portsmouoth legend. So many St Stephen's House ordinands came from London parishes and knew nothing of Anglo-Catholicism in the provinces. Yet Portsea was a slum every bit as much as London Docks or Pimlico, and Dolling's heroic work was still remembered sixty years later during the time of my second curacy (and another home Communicant threw me when she said her Grandfather had been a drummer boy at the Battle of Waterloo!) 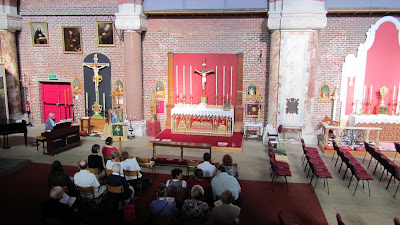 Today was a great delight. Thanks to the generosity of Fr Maunder, who looks after St Agatha's and ministers there to a TAC congregation, the local Ordinariate Group was able to celebrate mass in that amazing building. I shall say a little more about it on the Anglo-Catholic blog, but thought my faithful readers must not be denied some report of today's event. Fr Jonathan Redvers-Harris ministers to a Group on the Isle of Wight, besides a handful of loyal Ordinarians on the mainland of Portsmouth. His is the next group along the coast from ours in Bournemouth; the third group in Portsmouth Diocese is Fr Elliott's in Reading. On the hottest October day on record we were joined by a few of the TAC congregation, together with Fr Maunder and Bishop Robert Mercer C.R. How we hope that their application to join the Ordinariate will be able to be expedited in Rome. 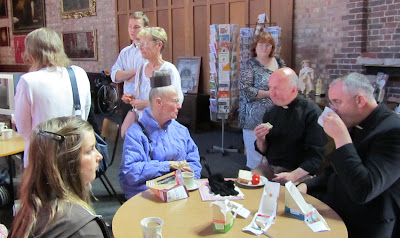 After Mass we sat in the ruined splendours of the vandalised South (Lady) Chapel - partly demolished after the Dockyard expansion scheme had engulfed St Agatha's, and new roads were constructed as the old slums (the few spared by German bombing) were cleared away. There we ate lunch, met some new friends, and looked forward to even great glory days when the Ordinariate is growing and flourishing. Fr Maunder (second from right above) has done heroic work in restoring St Agatha's, and the Lady Chapel is on his list whenever funds become available.
The need for Catholic mission is no less than in Fr Dolling's day, but the evils we combat are not the obvious ones of prostitution and drunkenness - rather the smug forgetfulness of God as we become more overtaken by the creed of acquisitiveness and 'rights'.
It was good to be joined by Fr Jonathan's parish priest in Ryde, Fr Anthony Glaysher (caught drinking tea in photo above), who is such a support to the Ordinariate Group.
Posted by Edwin at 15:52