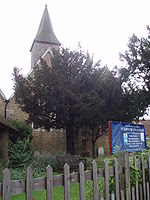 'For the avoidance of confusion I have to say that as far as the Diocese of London is concerned there is no possibility of transferring properties'.
So Bishop Richard Chartres at his Diocesan Synod last week.

By contrast, here is the Property Page of the Daily Telegraph four days later:
'A recent survey conducted by a property website declared that churches are the nation's favourite conversion'.

Now London, of course, is a special case. Not that its churches are bursting with eager worshippers; indeed, it is reckoned that the average worshipping congregation across the diocese numbers fewer than forty people. No, it is its bishop which makes London different. He has fought to keep churches open, even in the City where there are few residents, and for this determination he deserves much credit. But...

In his address to the Synod the Bishop related unhappy experiences of attempting to share a church building. 'The late Cardinal Hume, whom I greatly revered, brought to an end the experiment of church sharing after the Synod’s decision of 1992'. On the evidence of that handful of failed experiments the good Bishop is prepared to condemn every attempt at church sharing.

There was similar episcopal resistance nearly fifty years ago when in a Surrey parish we dared suggest to our Bishop of Guildford and his opposite number of Arundel & Brighton that our parish church might be useful to the Catholic community. Eventually, and a little grudgingly, the two bishops permitted the experiment. So it was that between our 8am celebration and the later Parish Communion, Catholics met in the Anglican Parish Church to say Mass.

Some of the friendships which developed from this modest experiment continue to this day. I am not sure if the sharing arrangement still flourishes; but it certainly did so for more than thirty years.

It takes a very special sort of leadership to feel unthreatened by such events yet when they are entered into with generosity and charity on all sides they can produce great results, so that even non-churchgoers can begin to say "How these Christians love one another!" - and say it, for once, with no trace of irony.

The present Bishop of London is famously implacable in his views. How stoutly he recently defended the Royal Family when one of his Suffragans dared to suggest they did not always produce the most stable of marriages. There is little prospect of any of the churches in his dioceses playing host anytime soon to a Catholic Mass; even though in many of them it might appear to be the Catholic Mass which is celebrated. There are seven years before age will force him to hang up his mitre if neither he nor the Almighty has decided it should happen earlier. Then will it be economic or ecumenical pressure which determines the fate of the underused churches of London Diocese? 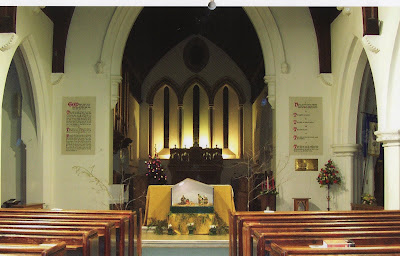 A shared place where Anglicans and Roman Catholics have worshipped
Posted by Edwin at 20:57