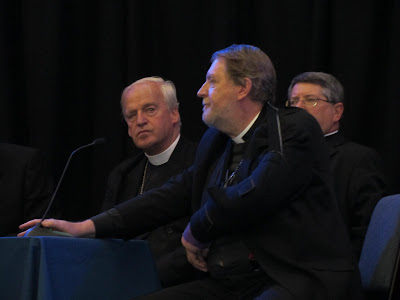 Once again, it seems to me that Bishop Andrew Burnham (Ebbsfleet) has succinctly discovered the weakness of those labouring to delay or undermine the Ordinariate. He wrote this in response to a posting on the Anglo-Catholic, but rather than giving you the labour of seeking that out, here is what he said:

"Fr Tomlinson's mistaking of the source of the press release, corrected by Fr Marsden, and the postal address of the Society being the same as FiF's encourages me to pass on the questions asked by some groups at the Ebbsfleet Lay Conference on Saturday 25th September. Isn't FiF the very Society we need and which we have already got? There were reminiscences of the language of 'seizing' what is not granted and 'our bishops' consecrating new bishops over the border. Why would FiF, re-inventing itself under new episopal leadership – the Society's named bishops, including the chairman of FOAG, instead of the 'old guard' of Fulham and PEVs – and called a 'Society' succeed now at 'seizing' where it previously failed? This is what the laity asked.
My own reflection is that when Bishop Mark talked at the Sacred Synod of a Society 'within the Church' he put his finger on the trojan which may destroy this project. 'Within the Church' means interchangeability of sacraments and ministers, dependence on a parent model. It is exactly the difficulty of those issues which has led the Church of England to reject traditionalists' proposals six times (Guildford, Gloucester-Guildford, Manchester Group, Synod 2008, Revision Committee, Synod 2010) and I don't think the Society proposal disguises the difficulties sufficiently to allow traditionalists proposals to slip through the seventh time round.
I offered a paper on the various solutions, including the Society model, five years ago and I discussed it then with bishops, including both archbishops (one of whom was a bishop at the time in the area Ebbsfleet serves), and subsequently by some of those on the Revision Committee. The problem then -and ever since – has been the same old issues of interchangeability of sacraments and ministers and relationship with the parent body.
My own conclusion is that those Anglicans who are not convinced by the ministry of Peter – beautifully proclaimed in the visit of the Holy Father to the UK this month – should remain with the untidiness of Anglicanism and relate to the rest of the Anglican world as they are directed to by bishops and synods – for that is the Anglican system. Those who accept the ministry of Peter should accept his warm welcome into full communion, a welcome re-iterated in the published speech to the Catholic bishops at Oscott College. There are two routes: one for groups ('the caravan') and the other for individuals journeying alone ('solo swimmers'). Despite press excitement, we have no timetable as yet for the first – though there are groups preparing themselves – and the second route is always available and is even open, at present, for married priests, though whether that would continue alongside an Ordinariate provision we have yet to discover.
We must not rain on each other's parades but there is much work to be done by the Society of Wilfred and Hilda before it is self-evident that it is viable. And it does need to be clear about its attitude to the Holy See and Anglicanorum Coetibus. Several have pointed out that both Wilfrid and Hilda were zealous supporters of bringing a fragmented British Christianity into a proper relationship with Roman conventions and the Latin Church. Is that its aim or among its objectives?
+Andrew"
Posted by Edwin at 10:14