Handing on the Faith 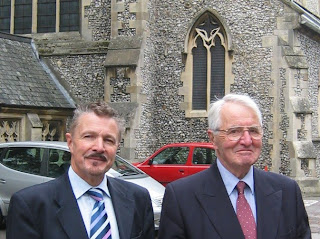 A very chilly Holy Trinity Winchester today - but still two cheerful churchwardens. The gauge on the oil tank had failed, so we were like the foolish Virgins, oil-less. For all that, the Mass went ahead, the singing was lusty as ever, and here is the sermon.

Do you find yourself sometimes humming a bit of a tune, and then you realise with a jolt that it is from way back in your history? When an old friend and I met the other week we reminisced of days in college, and then found that between us we could reconstruct most of the word of some silly song which had been written for end of term entertainments…. fifty years ago!

There are so many fragments of the past locked in our minds – not exactly in our memories, since we do not often consciously remember them. They just come to us unbidden, and it is hard to know what has jolted that bit of our brain into action. Often, they are things which once we worked at, committing them to memory; poetry learned at school, hymns from assemblies, speeches from plays. Earlier generations of Christians were better than we are at remembering whole chapters of Scripture, entire psalms, all the Prayer Book collects. This committing to memory is of the nature of the Church. On television this week, talking of the making of Britain, David Dimbleby visited Florence to see the earliest complete Bible in existence. There are older fragments, but this total Bible dates back to early 8th Century Jarrow, where the monks copied out the whole of Holy Scripture as a gift for the Pope. 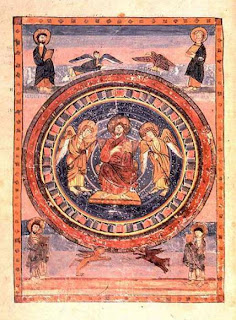 At that time books were incredibly precious. They were copied by hand from older copies, by the few learned men capable of writing. It was reckoned that the Jarrow Bible took several years for a group of monks to complete. Cost those man hours today, and you are dealing with hundreds of thousands of pounds.

So of course people learned by heart; that, and the hearing of parts of Scripture read in church, was the only access they had to the Sacred Texts. Now, all the words of the Bible can be held on a single compact disc. We become blasé about the word, and certainly give it little reverence. The text of today’s readings can be screwed up in our coat pockets along with the cough sweets and our small change. To realise how much it meant to our forefathers, we need to see how Muslims treat the Qu’ran. Nothing is ever placed on top of it, it has its own special bookstand, and they are ready to execute anyone who is caught defiling it.

This is not a plea for prosecuting those who maltreat the Bible. But we certainly have a duty ourselves to respect Holy Scripture We should, too, remember and honour those who handed the Word of life down to us in our day. Our parents and teachers who first read to us or taught us the Our Father. But also those more remote ancestors who safeguarded our heritage. Columba and his monks who crossed the Irish Sea to bring the faith to North Britain.
Augustine and his colleagues who braved the English channel a few years later, carrying copies of the scriptures and of the Pastoral Rule of Pope Gregory. All in order to hand on the Faith. Which is where we began; with St Paul in today’s epistle giving an account of his faith.

‘I want to remind you of the gospel I preached to you, the gospel your received and in which you are firmly established; because the gospel will save you only if you keep believing exactly what I preached to you’. No room in Paul’s teaching for “on the one hand – and on the other”… no, well, of course, that was all right for then, but we have grown out of that. Certainly none of “If Jesus were alive today he would change his mind” – because Jesus IS alive today, and the Church is meant to be where his teaching is safeguarded and handed on.

Then he gives, in just a couple of sentences, a précis of the Gospel he believed and taught; ‘namely that Christ died for our sins in accordance with the scriptures (that is to say, as the Old Testament had foretold): that he was buried, and that he was raised to life on the third day, again in accordance with the scriptures; that he appeared – first to Cephas and the twelve, then he appeared to more than 500 of the brothers at the same time most of whom are alive to this day, then he appeared to James, then to all the apostles, and last of all he appeared to me too.’
In those few words S Paul gives us a marvellous resumé of the Gospels… and it is probable that it was written before even some of the gospels had been committed to parchment. This is the very beginning of our Christian story; the handing on by word of mouth, or here in a letter, what people had learned about Jesus.

We have a responsibility to continue that handing on; tradition, which is what handing on means, is not dead. When we give a godchild a copy of the New Testament, when we say the Our Father over a child’s cot before she goes to sleep, when we make it plain at work that we are a Christian and will not take the Holy Name in vain, then we are part of the tradition.

So many people have suffered so much to enable us to be followers of Jesus. We can’t allow the desire for a quiet life to distract us from the same task of handing on the faith. It should constantly be going round in our heads, like a tune we learned long ago.

Paul, as he reminds us at the end of that epistle today, was not worthy to be called an apostle. He had perscuted the church, he was the very least of the apostles. His only value was in what he preached, and that was done not by him, but by the grace of God working in him. What matters, he says, is that I preach what the apostles preach, and that is what you all believed.

The faith is not a private matter, just between me and my God. We Anglicans are coming to a crucial moment, when we will have to decide between belonging to a body which is selective about its belief, deciding for itself what bits of the Gospel are important and what can be overruled; and a body which can seem severe and doctrinaire because it holds the faith which Paul and the Apostles held. It will not be easy – any more than it was easy for the first disciples to leave their nets to become fishers of men. Yet what we decide, and how we decide it, may determine how – and whether - the faith continues to be handed on to generations to come.
Posted by Edwin at 18:56